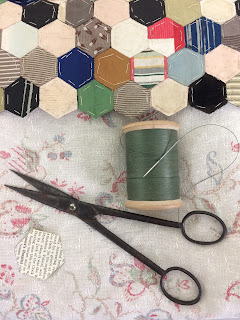 In this fast world of technology and advancement I think it is rather special the basic tools used to create traditional hexagon patchwork in the 19th century are still the same the 21st century.   Fabric, scissors, thread and paper templates were tools used then, just as they are now.


Thoughts reflect to the scarcity of paper, the precious commodity of fabric and the availability of thread.  Another essential requirement for the sewers of the 19 century was light and eyesight. Electricity was not used until the late 1880's.  I guess to create beautiful stitches sunlight would have been the only option.   It is easy in this age to take for granted night time rooms filled with false light supplied by electricity and to purchase spectacles as eyesight changes as we get older.

The image above on the left shows a sample piece of hexagon patchwork sample dated 1857. 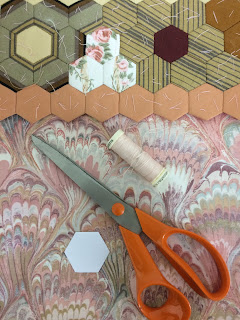 Back in the 1970's I used isometric paper to accurate create hexagon paper templates and is still my preferred choice. In the 19th century hexagons and other master shapes were made of wood or metal to draw around.  It was a family occupation, often the men taking care of the design process as the women sewed.

The choice of extensive fabric only a click away.  For me there cannot be a finer pleasure than sifting through my fabric stash to find the exact remnant for a chosen project as can be seen in the images below.  Vintage on left and Victorian on right.

Get professional trading signals sent to your cell phone every day.

Start following our signals today & gain up to 270% daily.