After creating and covering with fabric as many hexagons as you can from the spare curtain its now time to sort and but into some kind of order.   There is only one way to do this and that is to put all the hexagons on a floor space that will not be disturbed.    Gosford Cranberry has a bold pattern with a large repeat.   I focussed on using as much of the flora as possible. Bearing in mind this design is being planned as I go along.

In this instance it became obvious that many of the hexagons were aubergine and yellow.   I put those aside and concentrated with what was left.    Soon little groups formed of hexagons with similar colourings and content.   Once a subgroup or rosettes had been formed I was then able to concentrate on finding almost replicas.

When I was a child we used to play "The Memory Game" which comprised of about 100 cards with images on.....the hexagon process reminded me of my childhood.   An easy way to quickly find replicas is to lay a line from a subgroup and replicas will become evident.   When you have six almost replicas form a seven hexagon rosette with a solid colour for each centre.

The plan is to create as many seven hexagons as possible from the curtain.    Its strange how colours that initially seem to work well suddenly appear very "wrong" indeed.  I was convinced the red centre hexagon would be perfect.  It is not perfect and I will not be using it.   The same applies to the beige centre hexagon above.  It is not quite the right colour so I will not be using it.  Fortunately I have a slightly lighter cream which works really well.

Once happy with seven hexagons, stab together with a pin and place in sewing basket for sewing together later.   Its a good idea to take photos of your rosettes for reference when you sew together.

Leave remainder hexagons on floor until they are slowly eliminated into seven hexagon rosettes.   There will be odd ones left.   Be assured they will all be used.

Part 4 will continue this design process.
Posted by Unknown at 15:19 1 comment:

Next step is to calculate the size of your quilt and how many hexagons you will need.   At the moment only a very rough guide is needed.  A quick way to do this is to place a thick bit of string or wool at the head of the bed, where you want the top of your quilt to lay and unravel until it reaches the point you want quilt to finish.  Do the same for the width of the bed.  Lay each piece of string on a carpet in a straight line and secure each end with a pin stabbed into the carpet.

For width of bed do the same.  This time place one side hexagon and one centre hexagon forming a line as in item image below.

Make a note of how many hexagons form the length and width of your quilt.  This will enable you to create a skeleton pattern on a grid.   Remember this is only a rough guide and you may need to make adjustments around the borders.   It is very helpful to know the centre point of your quilt.   From the centre you can create a balanced skeleton design.  A quick calculation tells me that I will need about 1015 hexagons.

Creating a grid of hexagons can be achieved easily using a computer draw programme.  I used Pages on my Mac and Serif on PC.  Alternatively download and print a hexagon grid from my website  www.patchworktemplates.com  > hexagon patterns.

Part 3  will focus more on design and arranging your hexagons.

Create a patchwork quilt using large hexagons. Start with a spare curtain and design as you go. Part 1.

Create a patchwork quilt using large hexagons.   Start with a spare curtain and design as you go.


My last blog published a few days ago explained this would be my last hexagon quilt.   I would like to take this opportunity to show how to design a hexagon quilt without a pattern in mind.  On this occasion I am using a Laura Ashley Gosford Cranberry curtain measuring about 88" x 88".   I purchased two pairs for the bedroom, one window was smaller so split one curtain in half.  I hoped the spare curtain would make a bed throw but unfortunately it creased rather badly and started to irritate me.  Hence one of the reasons to make this matching quilt for the king size bed.

I want work to grow fast so I am using 10cm hexagons (each side measures 5cm).  I want the colours of the large flowers in the design to feature.  Designing cannot begin until I know how many large flower hexagons can be made from the curtain.

Place curtain on ironing board and iron.  Place a paper template over a flower and cut around giving at least 1cm seam allowance.   Its a large piece of fabric so I set a target of cutting 35 hexagons a day, and covered the paper templates with the cut flowers in the evening.   As a rough guide it took me about one hour to cover 30 hexagons.  Fortunately few distractions!

Keeping the remnants from the curtain for future use in the patchwork quilt.

Hexagon paper templates can be purchased from www.patchworktemplates.com if you do not wish to cut your own.

Part Two of the creation and design process will follow shortly.  Thinking ahead I have just remembered some fabrics that have been waiting for a project like this.  Must sort them out! 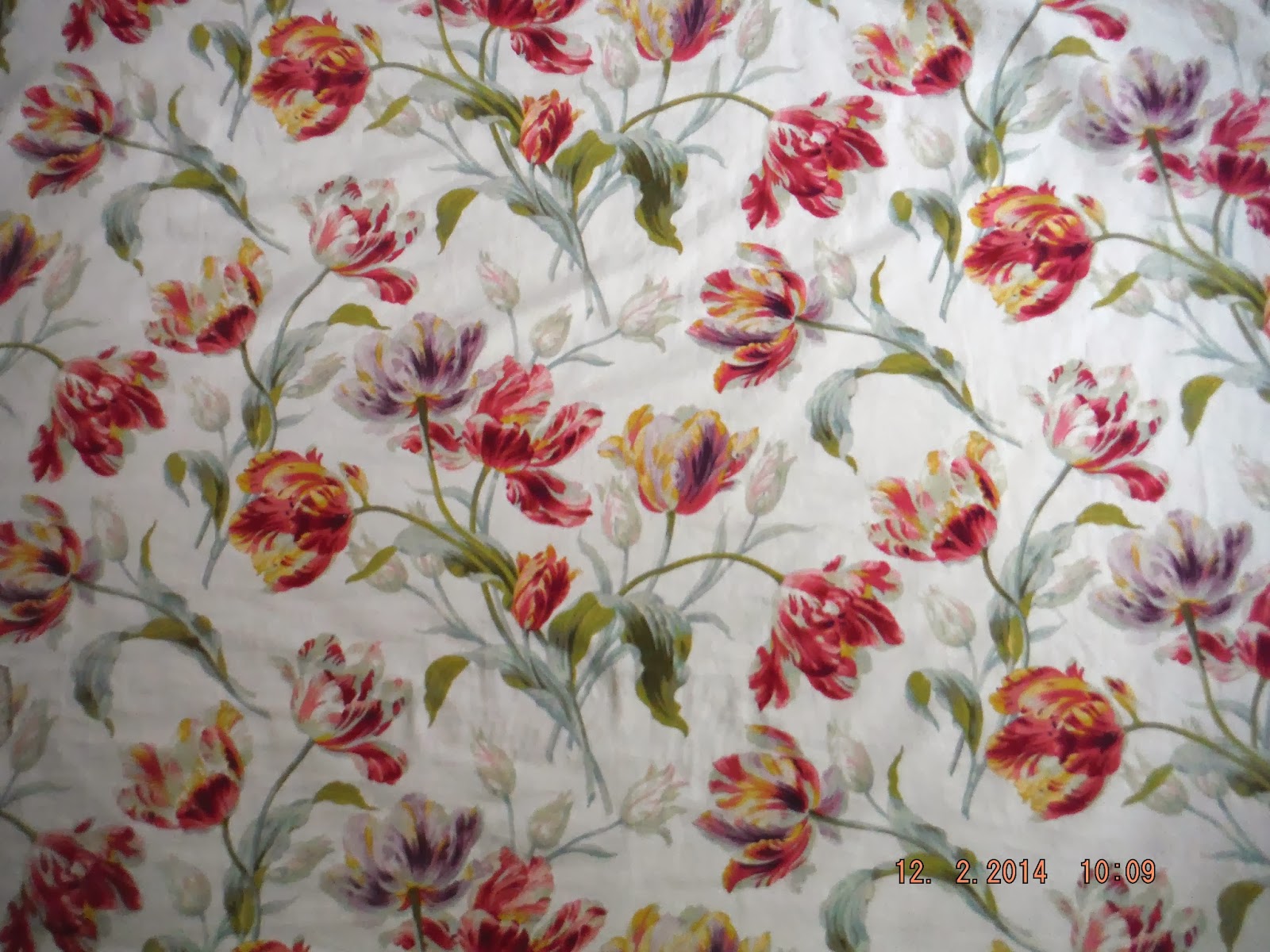 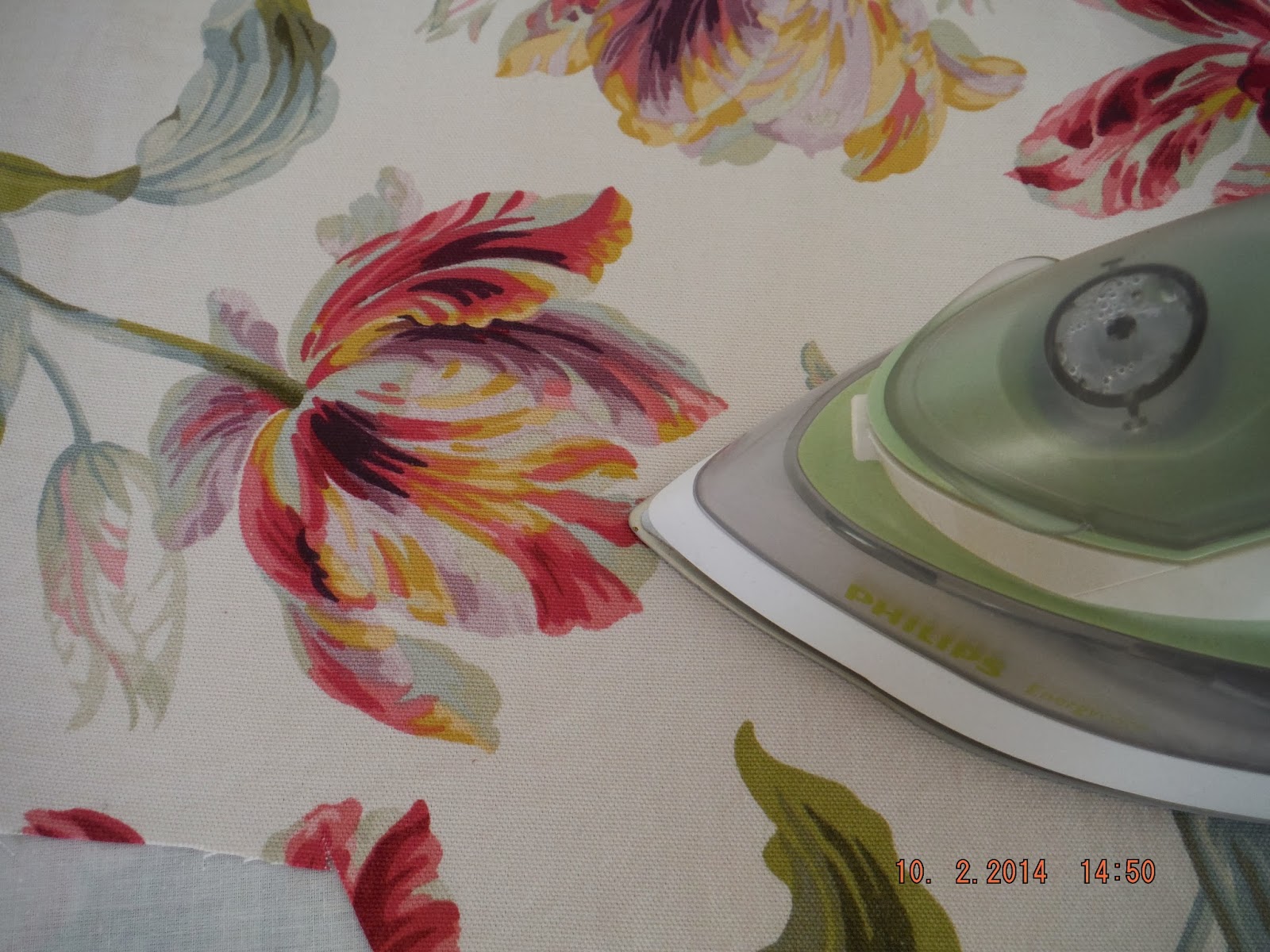 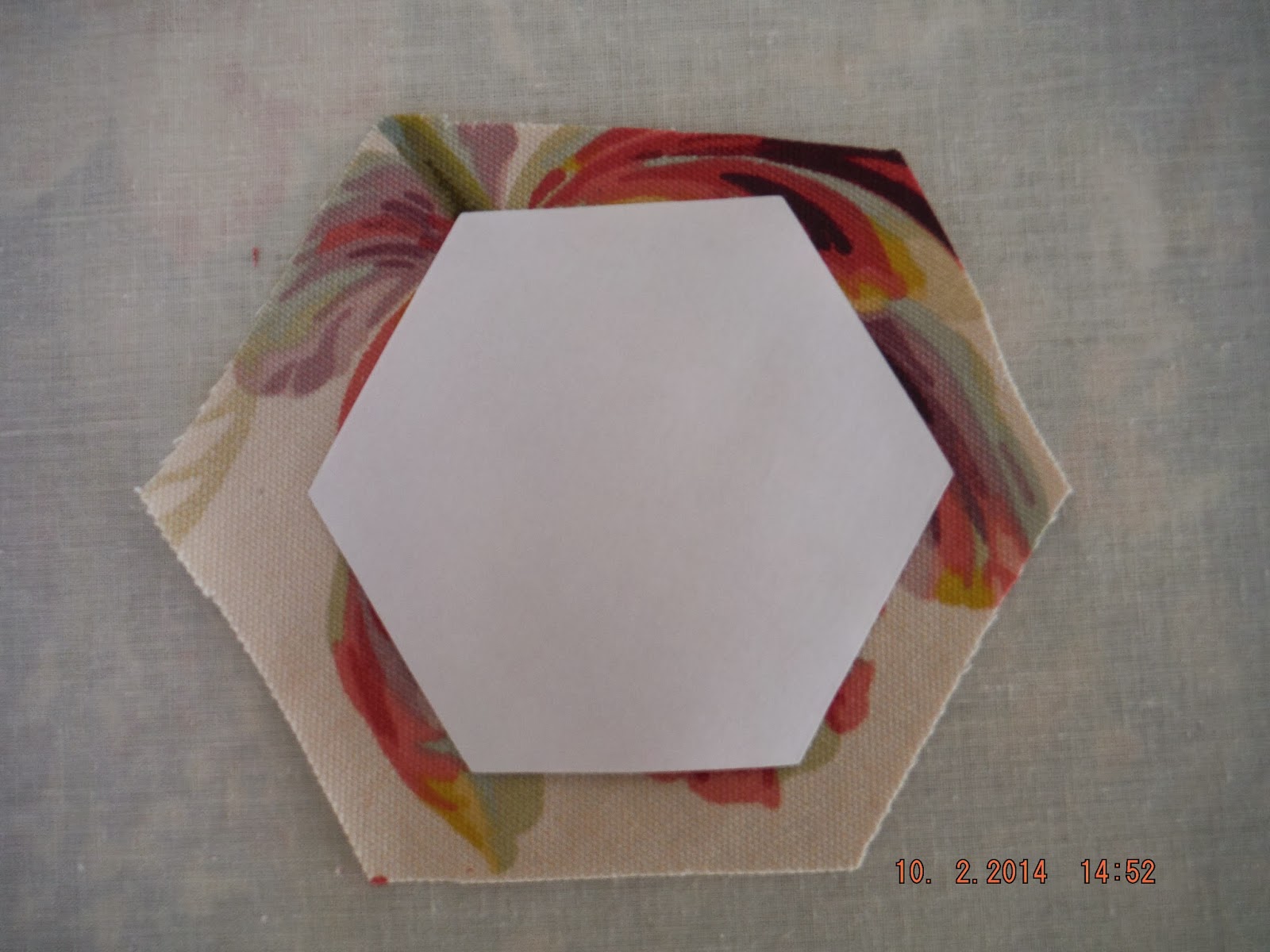 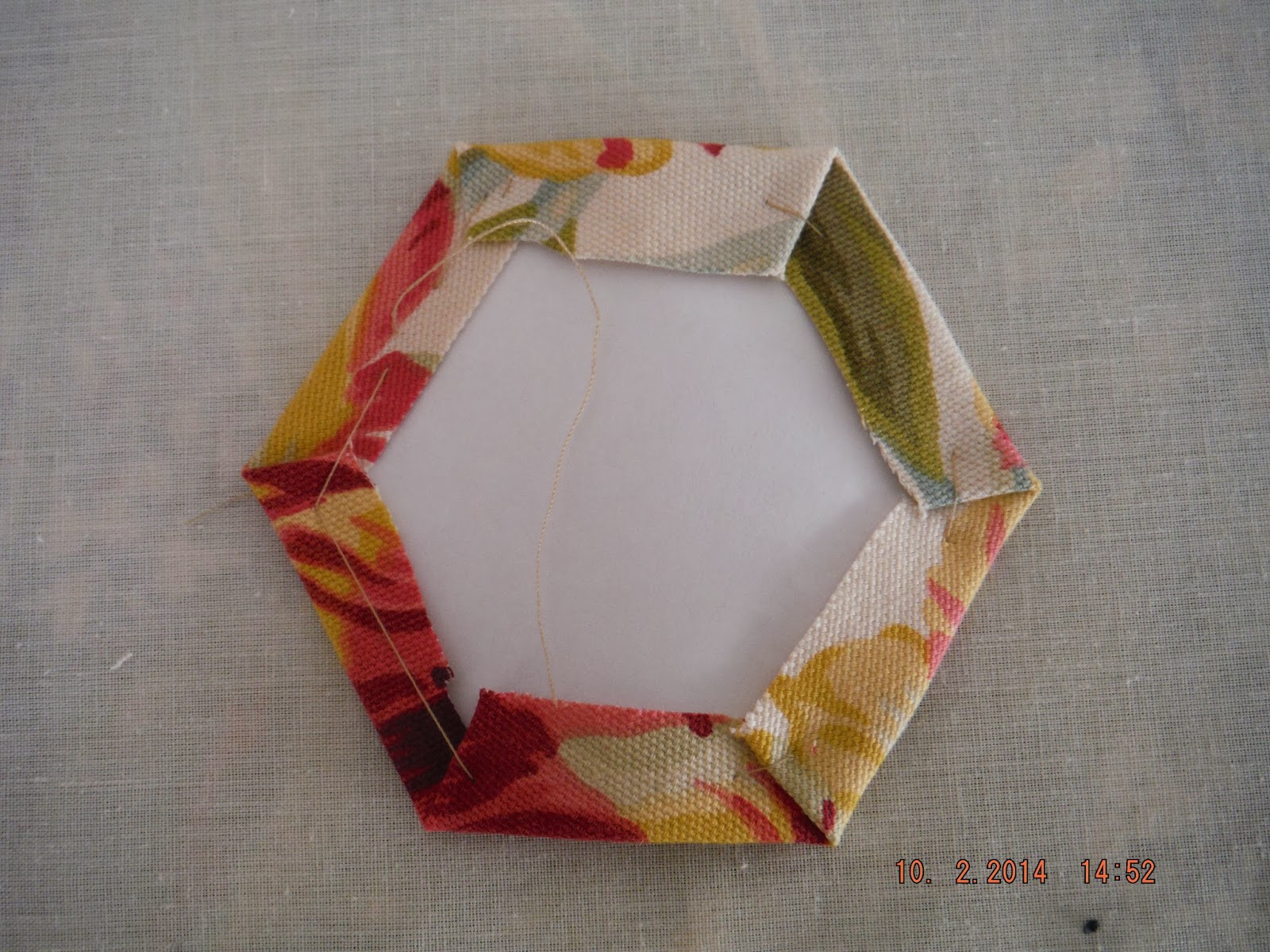 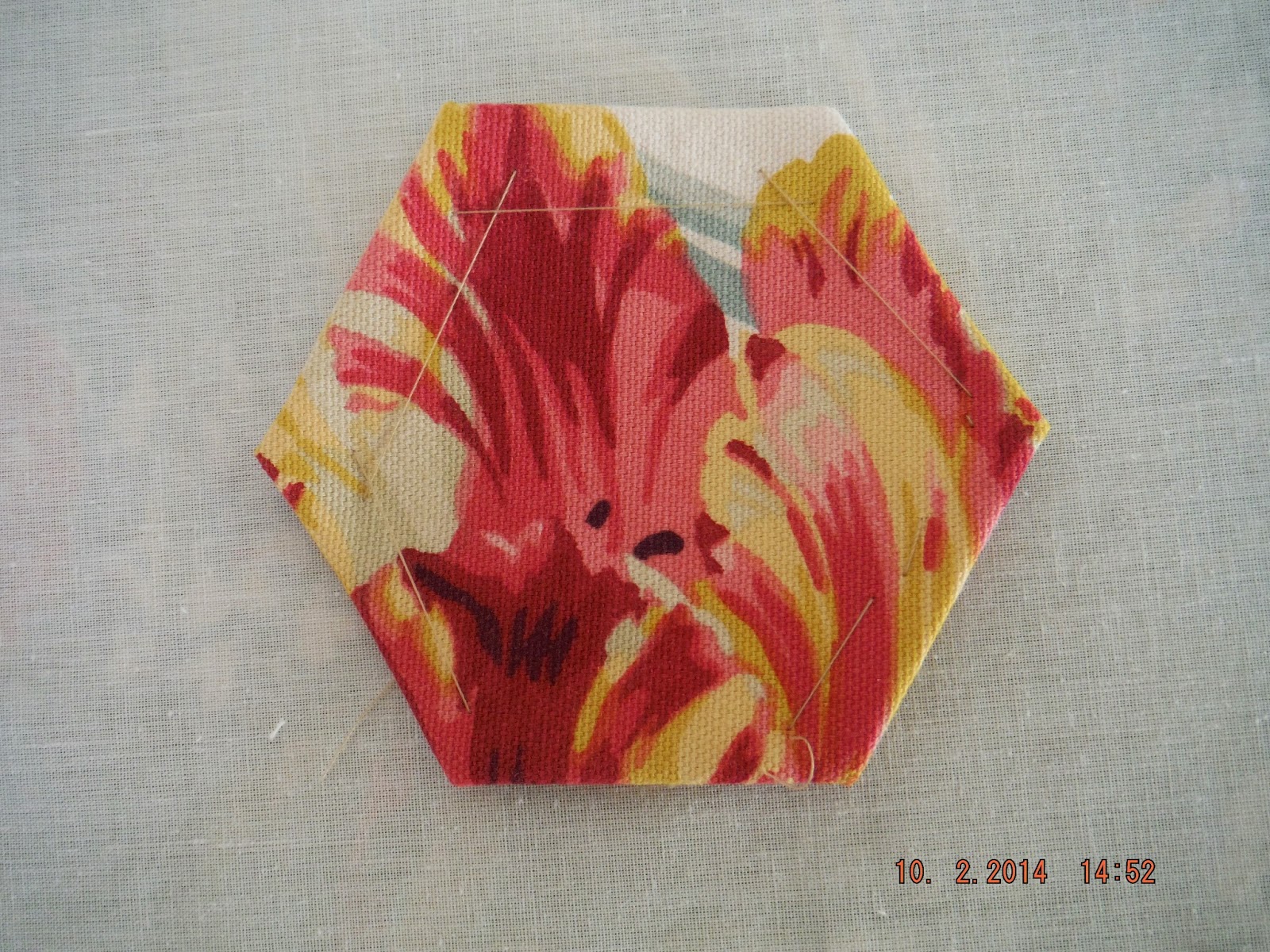 
I honestly thought I would not make another hexagon quilt.  This quilt is being created out of frustration of not being able to buy a bedcover to match curtains and carpet in our newly decorated  bedroom.  I do not have masses of time or the real inclination to make a big effort for this bedcover, neither do I want  it to be an expensive project.

Two sets of ready made curtains were purchased from Laura Ashley.  I just love the Gosford Cranberry design. The back window is smaller than the front, so I split a curtain in two which left one large curtain to make into a bed cover.   The floral design and colours looked great on the bed, but the curtain did not look nice.  It creased and is flimsy.  I searched for a ready made bedcover without success.  Nothing seemed to match the room and Laura Ashley could not help.

Reluctantly this weekend I have decided to create my last hexagon quilt.   Searching through my fabric stash I matched the spare curtain with some textured upholstery fabrics. The curtain and upholstery fabrics are different in weight and I am hoping this will create dimension.      I also purchased half a metre of Gosford Cranberry with a looser weave plus a matching stripe colour-way off the roll.  For speed I am going to use 10cm hexagons, each side measuring 5cm.  See www.patchworktemplates.com

I plan to update this blog frequently with my progress.   The hexagon patchwork design has not been planned yet.

My first hexagons were sewn 45 years ago and my work since then has been well documented, see www.jackiewills.co.uk and http://www.youtube.com/thejaxcollection