Coincidence or what? .........judge for yourself.  This blog is not about textiles.

Feel compelled to write about two incidences that occurred this week.  Need to air it and get it out my system.

About a week ago decided that the two plastic boxes had to be condensed into one.   These boxes contained diaries, old letters, newspaper cuttings and photographs from the 1980's and before.  It was a wrench to do and in hindsight should have chosen a time when each bit of paper could have been scrutinised.

I did the job standing up and was ruthless in my throwing.  Why keep Sunday Times magazines, newspaper articles and old letters and postcards from people who am no longer in contact with.   A postcard slipped, then ripped through my fingers from a chap with the initials D.W.   I remembered we had spent some pleasant times in the late 1980's hiking and going to events in London.    He disappeared off the radar completely.   I ripped his distinct handwritten card in two and that was that.

About three days later I was pushing a heavy trolly out of a supermarket entrance in a slightly harassed state.  Ahead of me, blocking the entrance was a lady and a man talking in an animated way.  He looked strangely familiar.    It was D.W. I did not interrupt the conversation and carried on my way.    How strange is that.....after 25 years off the radar, then two incidents in three days.  Weird.

The second happening occurred this morning.   Mornings are always busy and rushed off my feet.   I mostly always indoors working after 9am.

This morning completely out of sync I had the urge to find a galvanised bucket in the garden.  I never potter in the garden in the mornings.    A lady in her later years with a sleeping child in pushchair stood at the top of the drive.   I said hello and she seemed a bit overwhelmed, shy and tearful.   She told me she was visiting from a distance and that her parents once lived in our house and she wanted to walk past it.   I invited her in and we had the most pleasant conversation.

It really made her happy that we had kept the bannisters and curtain rails.   She said had I not been in the garden she would not have stopped.   Strange.  Very strange.

The image below is of "The Happy Book"  I could not throw it away.   I must have compiled it when about 8 years old.   Quoting one of the bits I wrote  "If I did not knit or sew, what would I do for hobbies"  How prophetic. 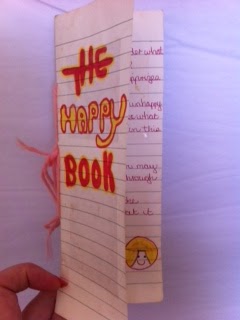